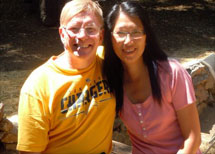 Serving the Lord in Macau, China

John “Rusty” and Kitty are missionaries in Macau. This former Portuguese colony is located on the southeastern coast of China. The total population is estimated at approximately 438,100 people in 1999, with about 95% of the population Chinese and 5% Portuguese, Europeans and from other regions. There is complete freedom of worship in Macau. The main religions are Buddhism, Catholicism and Protestantism. The majority are Buddhists while 7% are Catholics.

John came to Macau in 1980. He and Kitty were married in 1990. They serve together at Horizon Christian Fellowship Macau. The ministry consists of outreach to children from the ghetto, teens on the fringe of gangs, adults involved with gambling and crime, and contract workers from mainland China.